University of Maryland Professor Peter Shawhan received the 2018 Kirwan Faculty Research and Scholarship Prize during the campus’ annual Faculty and Staff Convocation ceremony on September 12, 2018. The prize, which provides a $5,000 stipend, recognizes a faculty member for a highly significant work of research, scholarship or artistic creativity completed within the last three years.

“The Kirwan Prize for 2018 recognizes [Shawhan’s] leadership on a variety of aspects regarding the Laser Interferometer Gravitational-wave Observatory (LIGO) experiment, which provided the first detection of gravitational waves produced by colliding neutron stars, and [his] work in multimessenger astronomy,” said UMD President Wallace D. Loh.

He earned his bachelor’s degree in physics from Washington University in St. Louis, joined the UMD Department of Physics in 2006.

“I came to the University of Maryland because it has an excellent physics department with a lot of different research specialties,” Shawhan said. “I was also familiar with the university because I lived nearby when I was in high school. I participated in the Physics Olympics here and still have a pin from the event.”

Prior to joining UMD, Shawhan was a senior scientist at the California Institute of Technology working on gravitational waves. He first learned about the research field as a graduate student at the University of Chicago, where he earned a Ph.D. in physics in 1999.

“I was studying particle physics at Chicago,” Shawhan said. “But near the end of my Ph.D., my advisor, Bruce Winstein, called me up one evening. He said, ‘[LIGO Co-founder] Kip Thorne is going to be my house tomorrow. Why don’t you come over and talk about LIGO?’ And I got interested.”

Gravitational waves—which Albert Einstein predicted in 1916 as part of the theory of general relativity—are ripples in the fabric of spacetime. In 2015, the LIGO detectors located in Livingston, Louisiana, and Hanford, Washington, detected gravitational waves for the first time. The finding led to the 2017 Nobel Prize in physics for Thorne, Rainer Weiss and Barry Barish.

As data analysis committee chair and a principal investigator of the LIGO Scientific Collaboration (LSC), Shawhan helped the collaboration conclude that the first gravitational waves detected came from the merger of two black holes that produced a single, more massive spinning black hole. In particular, Shawhan helped validate the analysis software that identified the black-hole merger signal a few minutes after the LIGO detectors recorded it. Shawhan also acted as a liaison with collaborating astronomers, performing rapid data analysis and sharing the results with them.

The detection of gravitational waves made it possible to study cosmological events using both gravitational wave detectors and electromagnetic telescopes, which can collect information about events using the entire spectrum of light. Shawhan led the LSC in developing this combined approach, called multimessenger astronomy.

“I first got into multimessenger astronomy in 2007, when a colleague donated telescope time so that some students and I could observe galaxies that our gravitational wave data suggested could be interesting,” Shawhan said. “We realized pretty quickly that it was hard work and we should leave it to professional astronomers, so we switched to collaborating with them.”

To quickly share information with astronomers collaborating with the LSC on multimessenger astronomy studies, Shawhan and his students developed a pipeline to rapidly process and check data from possible gravitational wave events. In addition, Shawhan recruited interested astronomers and helped them strategize about how to best follow up on gravitational wave observations.

Shawhan is particularly proud of the intense multimessenger astronomy campaign that followed the first detection of a merger event between two neutron stars—the dense, collapsed cores that remain after large stars die in a supernova explosion.

On August 17, 2017, gravitational waves from the merger arrived at the twin LIGO detectors. About two seconds later, NASA’s Fermi Gamma-ray Space Telescope detected a gamma-ray burst from the same source. Then, astronomers around the globe directed more than 70 space- and ground-based telescopes toward the event for follow-up observations.

Shawhan called the event one of the best moments of his research career.

“The neutron star merger event was the really spectacular breakthrough that we’d been hoping for,” Shawhan said. “It was just such a rich discovery. The fact that we had so many astronomers lined up to be ready to follow it up really paid off. “

UMD’s long history in the field of gravitational waves provided a boost to his research, Shawhan said. He specifically cited the influence of Physics Professor Emeritus Ho Jung Paik, who developed more sensitive detectors for gravitational waves and helped create the job opportunity that led Shawhan to UMD in the first place.

Today, UMD continues to provide Shawhan with opportunities to further his research.

“The physics department has been very supportive of my work on gravitational waves over the years,” Shawhan said. “It is also great to be able to collaborate with the Department of Astronomy, the Joint Space-Science Institute and NASA’s Goddard Space Flight Center. Through my involvement with them, I’ve become more involved in astrophysics. I’m actually getting involved in some space missions now!” 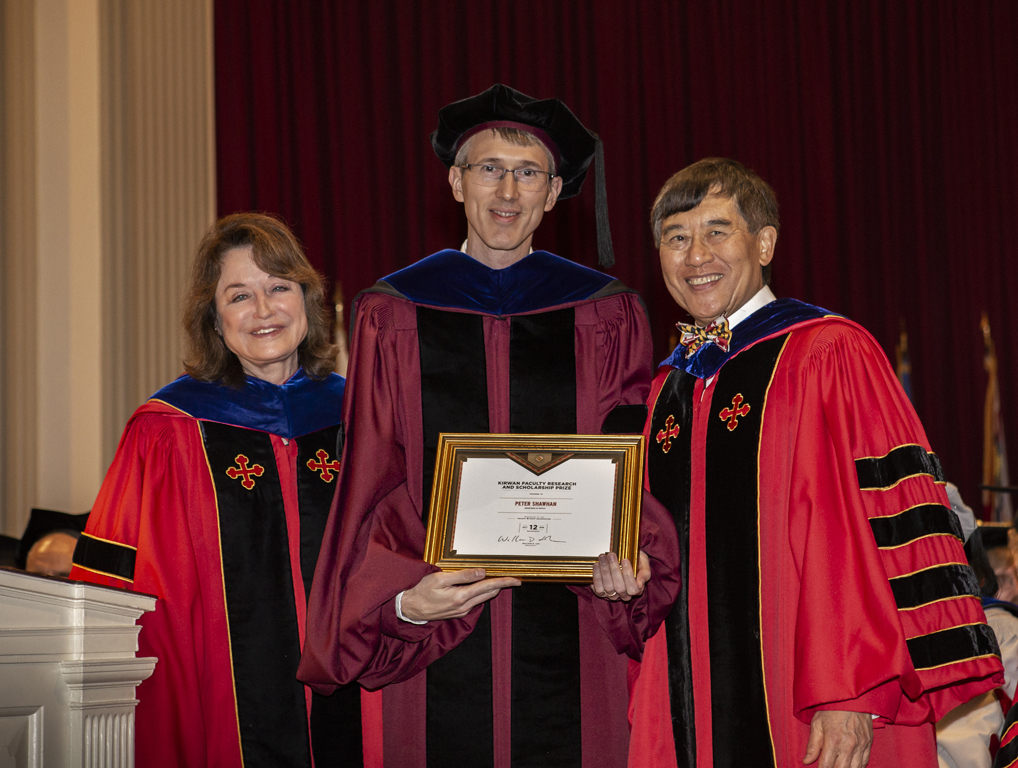 Media Relations Contact: Irene Ying, 301-405-5204, This email address is being protected from spambots. You need JavaScript enabled to view it.