A Physics Career of a Thousand Steps

Despite growing up in an information bubble in a small town in western Iran, Zohreh Davoudi started down the path of becoming a theoretical physicist at an early age.

“There was no internet, a TV with only two channels” Davoudi said. “There were limited books, some newspapers. You had this sort of obscured picture of reality.”

But what she also had was two parents—both teachers—who were dedicated to giving their six children an education. With their support, her path ultimately brought her to the University of Maryland in 2017. As an assistant professor, she is dedicated to tackling challenging problems one step at a time and leaving a strong foundation for future scientists.

Her work can’t be neatly classified; it straddles the fields of high-energy particle physics and low-energy nuclear physics. In particular, Davoudi wants to uncover how the Standard Model of particle physics—the theory that describes the most basic known forces and particles—brings about the reality at the heart of every atom, which is the domain of nuclear physics.

“The matter portion of the universe that we can see is better known than the other aspects of the universe, like dark matter and dark energy, but the visible sector of the universe by itself is still full of mysteries,” Davoudi said. “While we understand the underlying mechanism—the physics framework that describes the interactions at the fundamental level—it is a very hard, complex problem to put together these elementary particles, these building blocks, and build up a complex, large, many-body quantum system, which ultimately builds up our universe.”

Quantum chromodynamics (QCD) is the part of the Standard Model that elegantly describes the “strong interaction” that holds matter together. Exploring how it applies to creating protons and neutrons, and subsequently atomic nuclei, is a daunting challenge in modern nuclear physics.

Davoudi’s drive to understand the fundamental underpinnings of the universe has origins all the way back in her childhood. Her parents instilled a love learning in their children, and Davoudi developed a particular affinity for math.

When Davoudi was around 10 years old, her father went back to school for a second degree, despite the demands of having children and a full-time job as a middle-school science teacher, because he wanted to teach 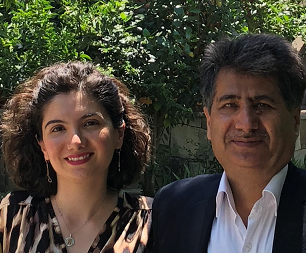 Davoudi and her father Hassan, Summer 2018. a more challenging subject—physics. And as her father studied physics, Davoudi’s fondness for math found a practical application that caught her imagination.

“He would come home with physics books, and they were very complicated, of course,” Davoudi said. “I couldn't even pass the first page often. But there is always a page of introduction or preface that had something very intriguing. And this all just got me curious.”

Her father explained all he could to her, and the two of them began to dream of her becoming a theoretical physicist. One of the first big steps toward that goal was to get accepted to a good university in the capital city, Tehran.

“I went to college to do physics,” Davoudi said. “It was obvious that's the only thing that could keep me interested and curious for a long time.”

As an undergraduate and then a master’s student at the Sharif University of Technology in Tehran, Davoudi was interested in high-energy physics and the big questions it tackles about the nature of reality, like the origin of matter and interactions and what drives the physics of the hidden “dark” sector of the universe. Then her hard work and interest in theoretical physics brought her to the University of Washington to do her Ph.D.

Once there, she took a step in a new direction when her previous, narrow perspective of nuclear physics as an old, tired field was overturned. She was drawn into nuclear physics by a class that she took mainly because she couldn’t find any other subject that she hadn’t already studied during her master’s degree.

“On the first day of the class, the professor comes in and writes the equations of the Standard Model on the board,” Davoudi said. “I was like, ‘This is not a particle physics class, what's going on?’”

She recalled him telling the class to “keep the QCD equation in your mind, and everything else I teach you in this course about nuclear phenomena, try to go back and ask, ‘How does this come from that equation?’”

That question and the approach of tackling nuclear physics from the foundation of QCD stuck with her. And that professor, Martin Savage, became her doctoral advisor.

“I just fell in 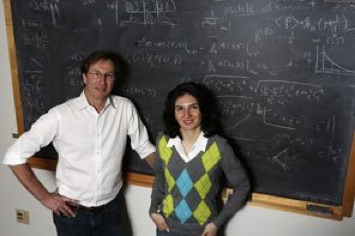 Davoudi and Ph.D. advisor, Prof. Martin Savage, University of Washington, Fall 2012. Photo credit: Seattle Times.love with nuclear physics,” Davoudi said. “The way it was presented to me was that nuclear physics started around a hundred years ago, so you can consider it an old field. But it's probably one of the most difficult sciences out there and that's why the progress has been slow but steady. However, as new tools and new perspectives were developed in recent times, our chance of answering big questions has improved considerably, and that is what keeps the field alive and exciting.”

She decided to join a community of dedicated researchers that have been steadily developing new tools and perspectives that keep the field alive and exciting as it takes on big questions about the nature of matter and reveals new details of our universe.

Looking to the Future

Since joining UMD, Davoudi has continued chipping away at the challenge of applying QCD to nuclear physics. In 2018, she was awarded the Kenneth G. Wilson Award for Excellence in Lattice Gauge Theory, one of the highest distinctions for a junior researcher in her field. In 2019 she received the prestigious Sloan Research Fellowship to support her work. She and her collaborators used the largest supercomputers in the U.S. to simulate the rate of proton-proton fusion in the Sun directly from the QCD equation, which they described as “a dream come true.” She sees this as just the beginning of understanding nuclear physics starting from the foundation of elementary particles and interactions.

As a new direction in her research, Davoudi is also partnering with colleagues who are pushing the frontiers of quantum computing. They are working together to lay a foundation for using quantum simulations to solve challenging nuclear-physics problems.

“The atmosphere here at Maryland around quantum is so vibrant and exciting, and there's so much good talent around that I just want to be part of it and bring something to the table that is not there,” Davoudi said. “And my expertise—lattice gauge theory and nuclear physics—it wasn't part of the program in quantum. So I thought, ‘Maybe that's something I can bring.’”

She collaborates with researchers at the Joint Quantum Institute and the Joint Center for Quantum Information and Computer Science. Her goal is to help figure out how to reframe her nuclear-physics problems into a form where a simulation can use quantum physics to do the tricky calculations that defy physicists’ current techniques.

“I want to see this quantum-simulation technology actually solve problems that I care about,” Davoudi said. “I want us to be able to simulate the collision of two heavy isotopes in experiment, and be able to track every step of the way after such a dramatic collision that mimics the universe after the Big Bang. It might not be possible today or tomorrow, even in a few years, but we have to start now. We must leverage the new computing resources that might be available in 10 or 20 years since they may revolutionize the type of computational problems we do in nuclear physics.”

She recognizes that these endeavors may not fully bear fruit until after she retires, but she believes now is the time to start building the foundation.

“I’m very hopeful about the future of this program,” Davoudi said. “I think new ideas and robust revolutionary tools arise when people with different experiences, backgrounds, and perspectives start talking to each other, and that can lead to something that had not existed before.”

Another way Davoudi is building this foundation is by mentoring students, whom she encourages to explore topics and classes beyond their current focus and to embrace challenges. She tries to show them the value of learning through tackling a challenging problem and to nurture their strengths as individuals. 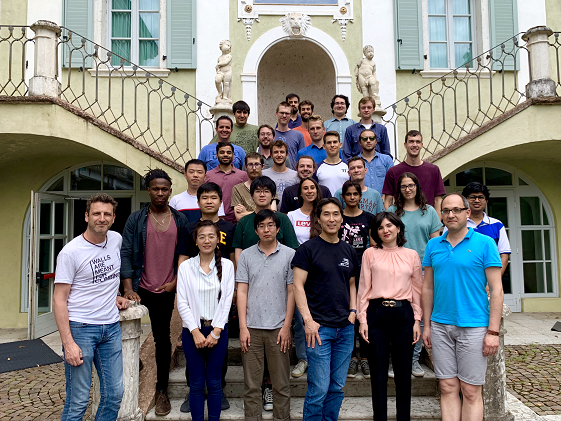 “If the student is good and motivated, you should give them a problem that matters,” Davoudi said. “Once they learn to solve a hard problem step by step, they won’t be afraid to tackle the next.”

According to Davoudi, every student and postdoc is an individual bringing unique perspectives, strengths and sometimes weaknesses. She says that mentorship is about building a stronger whole by matching together the right people and then helping them spot the next step toward progress on problems of real value to the scientific community—an approach that she learned from her own doctoral advisor.

Davoudi’s efforts to combine multiple perspectives from her colleagues and students isn’t just something that helps her push the boundaries of research; it has always been a part of her life. Even off campus Davoudi values looking at the world from multiple perspectives. She tries to read on a broad variety of topics including politics and social trends from around the world.

“I try to keep up to date whenever I get some free time,” Davoudi said. “That is something that has been kind of a hobby for me since I was a child. I would sit next to my father and read newspapers, or go to my mother’s classroom and help her with teaching duties even if the subject material was something that I was not familiar with. I’d read every book in my parents’ small bookshelf on subjects from literature and politics to biology and cooking, all full of words I sometimes could not even pronounce or understand, but still reading those gave me the hope that the world is bigger than what I was confined to at the time and there’s so much to explore.”

Written by Bailey Bedford with contributions from Chris Cesare