In many situations, it’s fair to say that light travels in a straight line without much happening along the way. But light can also hide complex patterns and behaviors that only a careful observer can uncover.

This is possible because light behaves like a wave, with properties that play a role in several interesting phenomena. One such property is phase, which measures where you are on an undulating wave—whether you sit at a peak, a trough or somewhere in between. When two (otherwise identical) light waves meet and are out of phase, they can interfere with one another, combining to create intricate patterns. Phase is integral to how light waves interact with each other and how energy flows in a beam or pulse of light.

Researchers at the University of Maryland, led by UMD Physics Professor Howard Milchberg, have discovered novel ways that the phase of light can form optical whorls—patterns known as spatiotemporal optical vortices (STOVs). In a paper published in the journal Optica on Dec. 18, 2019, the researchers captured the first view into these phase vortices situated in space and time, developing a new method to observe ultra-fast pulses of light.

Each STOV is a pulse of light with a particular pattern of intensity—a measure of where the energy is concentrated—and phase. In the STOVs prepared by Milchberg and his collaborators, the intensity forms a loop in space and time that the researchers describe as an edge-first flying donut: If you could see the pulse flying toward you, you would see only the edge of the donut and not the hole. (See leftmost image below, where negative times are earlier.) In the same region of space and time, the phase of the light pulse forms a swirling pattern, creating a vortex centered on the donut hole (rightmost image). 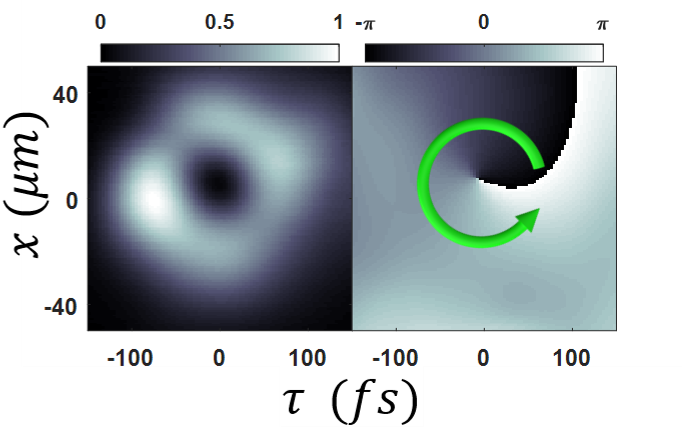 Processed data showing the intensity forming a ring (left) and the phase forming the vortex (right) in a spatiotemporal optical vortex. The green arrow indicates the increase of the phase around the vortex. (Credit: Scott Hancock/University of Maryland)

Milchberg and colleagues discovered STOVs in 2016 when they found structures akin to “optical smoke rings” forming around intense laser beams. These rings have a phase that varies around their edge, like the air currents swirling around a smoke ring. The vortices made in the new study are a similar but simpler structure: If you think of the original smoke ring as a bracelet made of beads, the new STOVs are like the individual beads.

The prior work showed that STOVs provide an elegant framework for understanding a well-known high-intensity laser effect—self-guiding. At high intensity, this effect occurs when a laser pulse, interacting with the medium it’s traveling through, compresses itself into a tight beam. The researchers showed that in this process, STOVs are responsible for directing the flow of energy and reshaping the laser, pushing energy together at its front and apart at its back.

That initial discovery looked at how these rings formed around a beam of light in two dimensions. But the researchers couldn’t explore the internal working of the vortices because each pulse is too short and fast for previously established techniques to capture. Each pulse passes by in just femtoseconds—about a 100 trillion times quicker than the blink of an eye.

“These are not microsecond or even nanosecond pulses that you just use electronics to capture,” says Sina Zahedpour, a co-author of the paper and UMD physics postdoctoral associate. “These are extremely short pulses that you need to use optical tricks to image.”

To capture both the intensity and phase of the new STOVs, researchers needed to prepare three additional pulses. The first pulse met with the STOV inside a thin glass window, producing an interference pattern encoded with the STOV intensity and phase. That pattern was read out using two longer pulses, producing data like that shown in the image above.

“The tools we had previously only looked at the amplitude of the light,” says Scott Hancock, a UMD physics graduate student and first author of the paper. “Now, we can get the full picture with phase, and this is proof that the principle works for studying ultrafast phenomena.”

STOVs may have a resilience that is useful for practical applications because their twisting, screw-like phase makes them robust against small obstacles. For example, as a STOV travels through the air, parts of the pulse might be blocked by water droplets and other small particles. But as they continue on, the STOVs tend to fill in the small sections that got knocked out, repairing minor damage in a way that could help preserve any information recorded in the pulse. Also, because a STOV pulse is so short and fast, it is indifferent to normal fluctuations in the air that are comparatively slow.

“Controlled generation of spatiotemporal optical vortices may lead to applications such as the resilient propagation of information or beam power through turbulence or fog,” says Milchberg. “These are important for applications such as free-space optical communications using lasers or for supplying power from ground stations to aerial vehicles.”

In addition to Milchberg, Zahedpour and Hancock, graduate student Andrew Goffin was a co-author.

Media Relations Contact: Bailey Bedford, 301-405-9401, This email address is being protected from spambots. You need JavaScript enabled to view it.