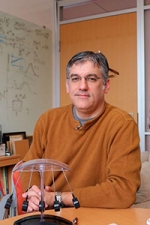 Christopher Monroe specializes in the isolation of individual atoms for applications in quantum information science. He earned his Ph.D. in 1992, working with Carl Wieman and Eric Cornell at the University of Colorado, helping plot the path to cooling a cloud of atoms to the Bose-Einstein condensation transition.  (Wieman and Cornell succeeded in their quest for BEC in 1995, and were awarded the Nobel Prize in Physics for this work in 2001.)

From 1992-2000, Monroe worked in the NIST group of David Wineland, leading the team that demonstrated the first quantum logic gate and exploited the use of trapped atoms for the first controllable qubit demonstrations. He was awarded the I. I. Rabi Prize of the American Physical Society in 2001 for his work with trapped ions, and Wineland won the Nobel Prize in Physics 2012.

In 2000, Monroe became Professor of Physics and Electrical Engineering at the University of Michigan, where he pioneered the use of single photons to couple quantum information between atoms, and also demonstrated the first electromagnetic atom trap integrated on a semiconductor chip. From 2006-2007 was the Director of the National Science Foundation Ultrafast Optics Center at the University of Michigan. In 2007 he became the Bice Zorn Professor of Physics at the University of Maryland and a Fellow of the Joint Quantum Institute. In 2008, Monroe's group succeeded in producing quantum entanglement between two widely separated atoms and for the first time teleported quantum information between matter separated by a large distance. Since 2009 his group has investigated the use of ultrafast laser pulses for speedy quantum entanglement operations, pioneered the use of trapped ions for quantum simulations of many-body models related to quantum magnetism, and has proposed and made the first steps toward a scalable, reconfigurable, and modular quantum computer.

Monroe is a UMD Distinguished University Professor, and has received the Willis E. Lamb Award for Laser Science and Quantum Optics, a Presidential Early Career Award for Scientists and Engineers and the American Physical Society Arthur Schawlow Prize for Laser Science. He is a fellow of the American Physical Society, the American Association for the Advancement of Science and the Institute of Physics. In 2016, he was elected to the National Academy of Sciences.