Zohreh Davoudi, an assistant professor of physics at the University of Maryland, has been awarded a 2019 Sloan Research Fellowship. Granted by the Alfred P. Sloan Foundation, this award identifies 126 early-career scientists every year based on their potential to contribute fundamentally significant research to the wider academic community. 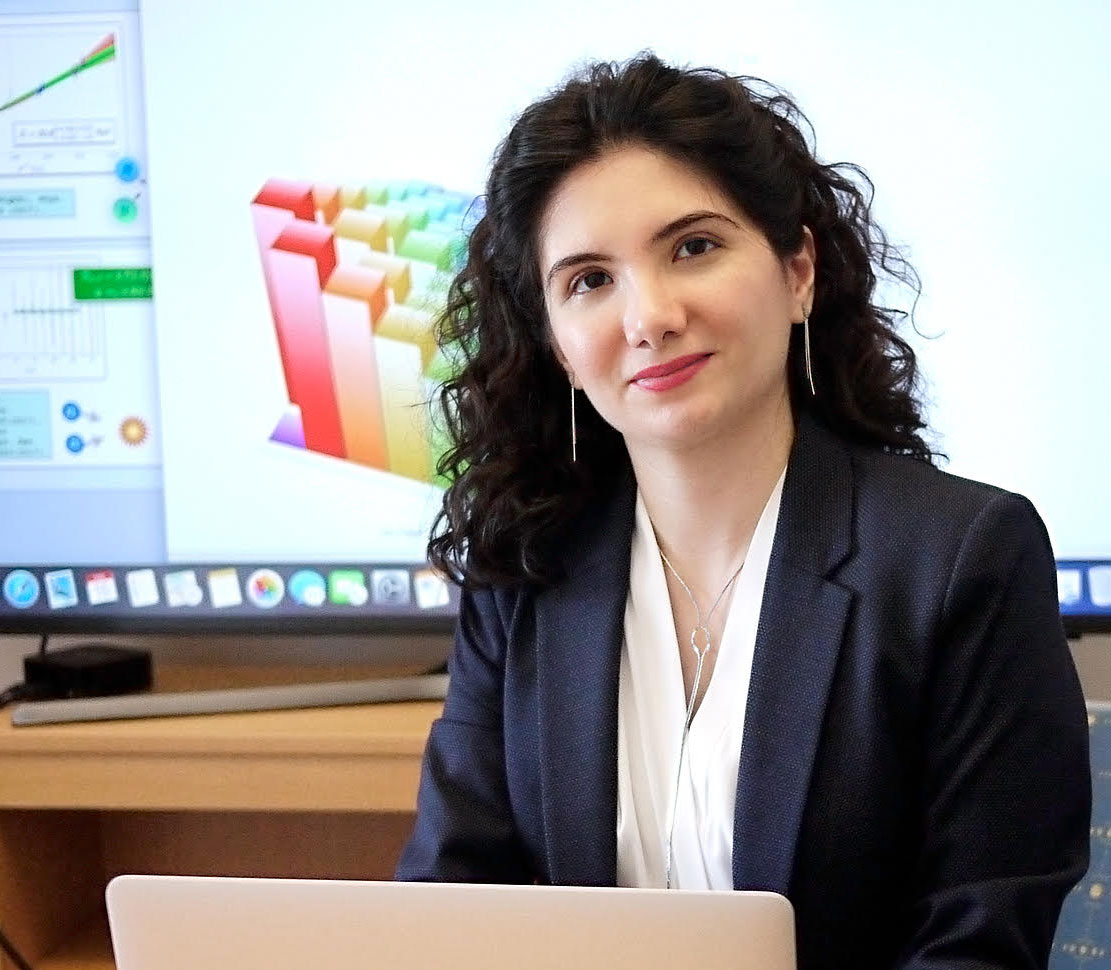 Zohreh Davoudi, an assistant professor of physics at the University of Maryland, has been awarded a 2019 Sloan Research Fellowship. Image credit: Faye Levine

Davoudi, a theoretical nuclear physicist who studies how complex phenomena in nature connect to the Standard Model of particle physics, will use the fellowship to further her research into properties of matter—especially in cases where matter is used in laboratories to detect new particles and interactions not currently accounted for by the Standard Model.

“It is a great honor to be selected as a Sloan Fellow,” said Davoudi, who also has an appointment at the Maryland Center for Fundamental Physics. “Knowing that a committee of esteemed physicists saw promise in my research plan provides further motivation to continue addressing fundamental questions in nuclear physics. It encourages me to keep doing what matters to me scientifically and academically.”

Davoudi’s research seeks to bridge the gap between the theory of quantum chromodynamics—a specialized part of the Standard Model that explains the interactions between quarks and gluons, two elementary particles that make up larger particles such as protons and neutrons—and observations that lie within and beyond the boundaries of current scientific knowledge. Her work could make important contributions to physicists’ understanding of a range of phenomena, such as the nature of dense matter in the interiors of neutron stars; fusion reactions that occur in the hearts of stars; and neutrinoless double beta decay, an exotic process that violates the tenets of the Standard Model.

“On paper, quantum chromodynamics provides a relatively simple picture of fundamental particles and interactions. However, a wealth of complexities arise in nature from these interactions,” Davoudi explained. “So far, physicists haven’t been able to fully build the connection between these complexities and the underlying theory. One of the main thrusts of my research has been to define pathways between computer simulations of nuclear systems and the properties of these systems as observed in nature.”

Much of Davoudi’s research applies a method called lattice quantum chromodynamics (LQCD). By restricting quantum chromodynamics to be defined by a set of discrete points in finite space and time, researchers can use LQCD to reduce big, intractable problems into smaller pieces that a supercomputer can handle. Davoudi’s research shows how to remove these restrictions to make reliable predictions about complex systems. Working with her collaborators, Davoudi has applied these methods to perform accurate simulations. For example, Davoudi and her colleagues were the first to calculate the rate of proton fusion and the beta decay of tritium, a radioactive isotope of hydrogen. The researchers described their findings in a research paper published in 2017 in the journal Physical Review Letters.

With the Sloan Research Fellowship, Davoudi plans to continue pushing the boundaries of LQCD and other related techniques into new and exciting areas. As part of this effort, she plans to expand her research group to accelerate the pace of creating and testing new ideas. Davoudi is particularly excited about creating new collaborations with researchers at the Joint Quantum Institute, a partnership between UMD and the National Institute of Standards Technology, to use quantum computing to address computationally complex problems in nuclear physics.

Davoudi earned her bachelor’s and master’s degrees in physics from the Sharif University of Technology in Tehran, Iran, in 2007 and 2009, respectively. She earned her doctoral degree in theoretical physics from the University of Washington in 2014. In 2018, she was awarded the Kenneth G. Wilson Award for Excellence in Lattice Gauge Theory, one of the highest distinctions for a junior researcher in her field. Davoudi is also a fellow of the RIKEN Nishina Center for Accelerator-Based Science.

The two-year, $70,000 Sloan Research Fellowships are awarded to U.S. and Canadian researchers in the fields of chemistry, computer science, economics, mathematics, computational and evolutionary molecular biology, neuroscience, ocean sciences, and physics. Candidates must be nominated by their fellow scientists and winning fellows are selected by independent panels of senior scholars on the basis of each candidate’s independent research accomplishments, creativity and potential to become a leader in his or her field.

“Sloan Research Fellows are the best young scientists working today,” said Adam Falk, president of the Alfred P. Sloan Foundation. “Sloan Fellows stand out for their creativity, for their hard work, for the importance of the issues they tackle, and the energy and innovation with which they tackle them. To be a Sloan Fellow is to be in the vanguard of twenty-first century science.”