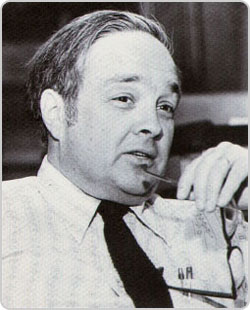 Bob was a brilliant physicist and superb administrator. He received his PhD from MIT in 1948, was a postdoc/assistant professor/associate professor at Yale until 1964, and a Professor at the University of Massachusetts, Amherst, as Chair of the Physics Department for 5 years, and Provost until 1975. He was Chancellor here (the same position is called President now) from 1975 to 1982, when he stepped down to return to full-time teaching and research. He did research in many fields, from early work in coulomb scattering, nucleon scattering, relativistic electrodynamics, to more recent work in accelerator theory and non- linear dynamics. As an aside, he was a long time participant in the Maryland Choir. As another aside, Bob once wrote a paper on how to calculate the uncertainties in the measurement of the curvature (and hence the momentum) of charged tracks in magnetic fields due to multiple scattering and measurement errors. This paper had a huge impact in the field of particle physics.

Bob was an extraordinary physicist who had a pure and deep understanding of the material. In the past few years, true to form, Bob played an important role in the Slawsky clinic. He really enjoyed having contact with the students. Indeed, while Chancellor, he was also a TA in Physics and Math (assisting both Jordan Goodman and Vic Korenman). He was a superb teacher and human being to the end, and he fought a hard fight with cancer. We will miss him, his rich New Yawk accent, his good nature, his perspective, his brilliance, and his friendship.