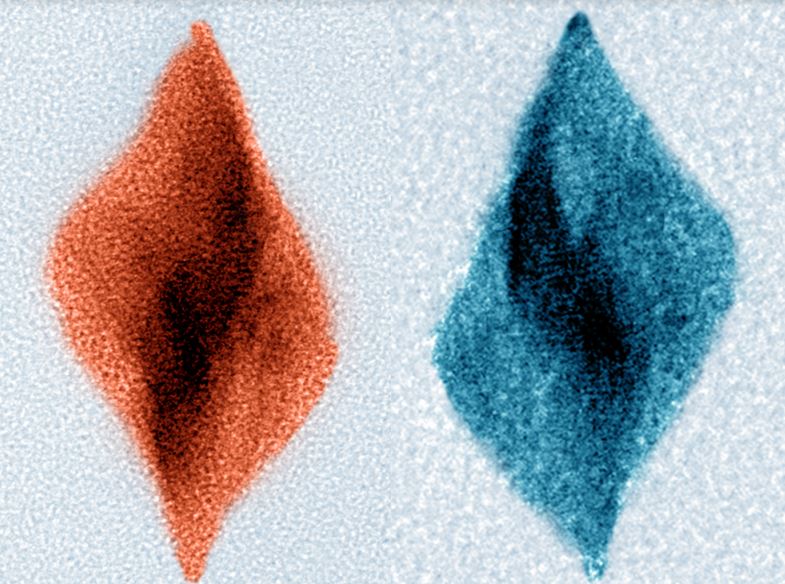 Chirality is another name for the asymmetry that we see between our left and right hands. This handedness crops up nearly everywhere in nature, from galaxy spirals down to the quantum mechanical properties of fundamental particles. Life itself boasts some of the most well-studied examples of chirality, including DNA's famed helical staircase.

Recently, some scientists have turned their attention to chirality found in the inorganic world of rocks, minerals and other non-biological materials. University of Maryland physics professor Min Ouyang leads a team that has been working to control chirality in tiny inorganic arrangements called nanocrystals. Their goal is to understand how atoms can cooperate to form larger, superchiral objects, analogous to how assemblies of carbon atoms stack into DNA. To achieve this, the researchers developed a new recipe for both engineering and analyzing chiral nanostructures from the bottom-up. This research was published recently in the open access journal Nature Communications.

Ouyang, whose work has been inspired by biological chirality, sees this research as an exciting step, with applications to a broad range of inorganic structures with tunable chirality. "Our technique is general, and does not depend on the material we used," Ouyang says. "Using inorganic molecules, we could mimic natural assemblies, perhaps building a DNA-like strand from the ground-up and study its chiral dependent physical properties, step by step."

The recipe begins in a flask containing a carefully crafted solution of cinnabar and penicillamine, both of which are chiral and play different roles in guiding the growth of nanostructures. Cinnabar, a red compound found naturally in volcanos, is readily synthesized in the laboratory. Here, it acts as an atomic building block, seeding the growth of chiral lattices. The mercury and sulfur atoms that make up cinnabar line up according to the handedness of the initial seeds. Penicillamine, an organic drug molecule, provides a helping hand for guiding the larger cinnabar assemblies. Smaller bits of cinnabar take their cue from the penicillamine's orientation, left or right, and stack into even bigger shapes, eventually completing a full nanocrystal.

Such crystal growth techniques have been used before, but Ouyang's group modified the process so that they could, for the first time, independently manipulate chirality of both the atomic building blocks and the larger crystals.

The researchers assembled crystals that ranged in size from tens of nanometers to a few hundred nanometers—roughly the size of viruses. They adjusted both the final nanocrystal size and their handedness by tweaking the different growth conditions. To show that they could control chirality the team purposefully constructed other, non-chiral shaped nanocrystals, like rods and cubes. 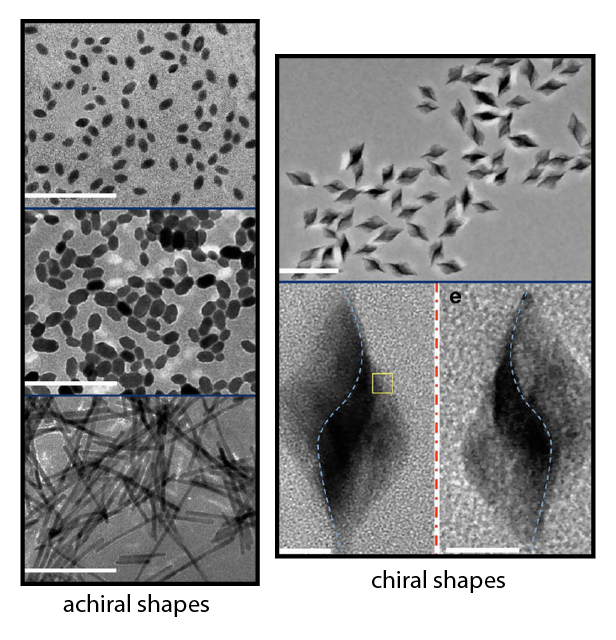 Caption: Electron microscope images of achiral and chiral shapes. The dotted line on the right chiral nanostructures outlines the twists that are the visual signature for handedness. (Images from paper, courtesy of authors)Ouyang and his collaborators used complementary methods to measure the chirality of their nanocrystals. They employed a high-power electron microscope to take snapshots of their creations, providing the first direct image of cinnabar's handedness. The images (inset) show diamond-like crystals with a pronounced s-shaped line where the shape is twisting. This twist, left or right, is the visual signature of the final product's chirality. In the case of the non-chiral structures, no 's' is present.

The researchers also shined light onto samples and looked at how they responded. Using this standard probe, they saw that, as expected, asymmetric structures absorbed light waves according to their handedness. More importantly, they used the optical absorption measurement to monitor the chirality at each growth stage, from molecules to lattices to nanocrystals. To complete the study, the team developed a mathematical model for understanding this observed chiral evolution, one that was adaptable to the different length scales.

Taken together, Ouyang and colleagues have demonstrated a powerful method for systematically examining nanoscale chirality, which includes flexible synthesis, direct visualization, and a tested computational tool. Bottom-up experiments, like this work, may enable a better understanding of chirality in inorganic materials, such as those used for novel quantum spin-based technologies.