Physics Professor Min Ouyang and Biochemistry Professor YuHuang Wang have created a fabric that dynamically regulates heat passing through it.

Despite decades of innovation in fabrics with high-tech thermal properties that keep marathon runners cool or alpine hikers warm, there has never been a material that changes its insulating properties in response to the environment. Until now. 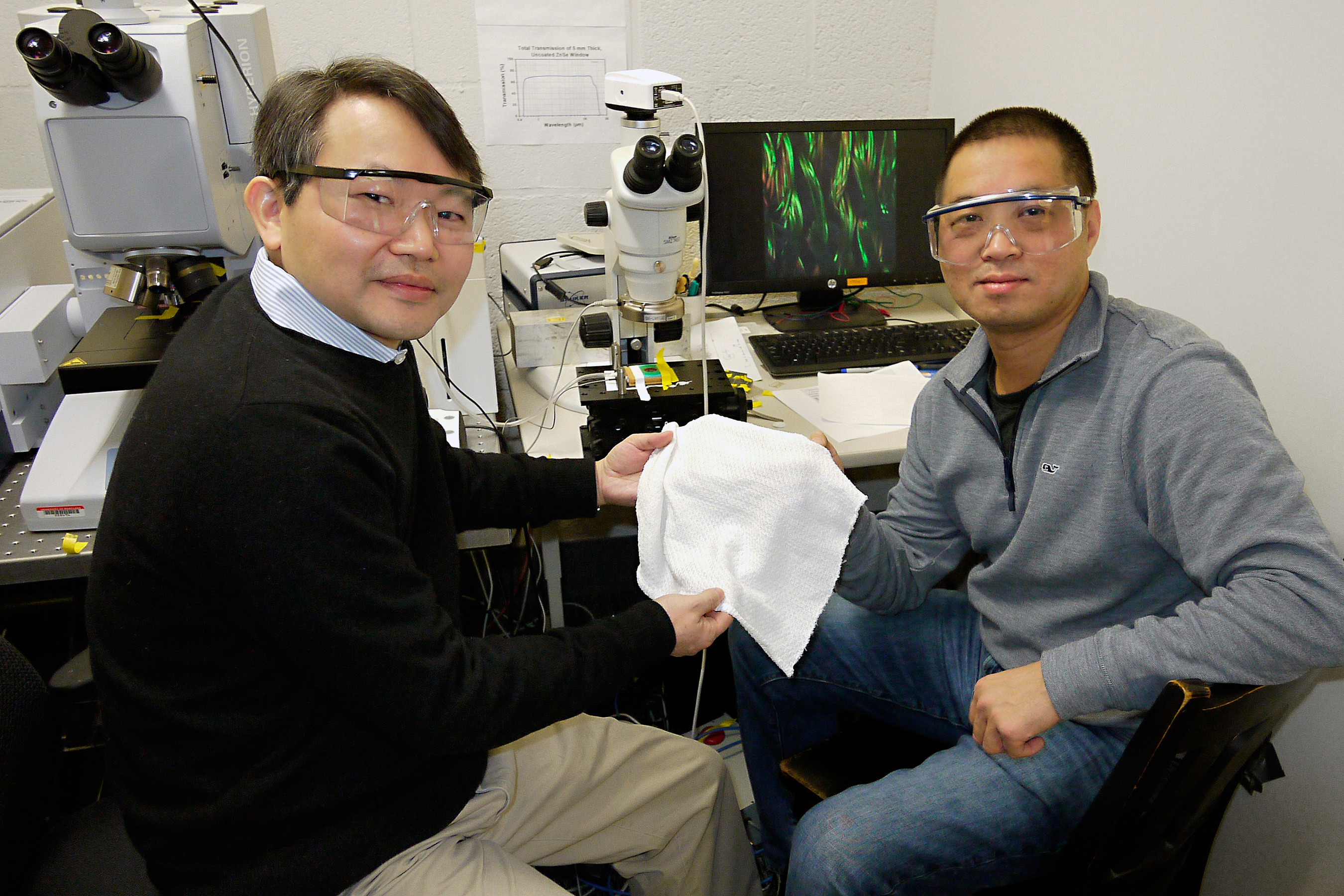 University of Maryland researchers have created a fabric that can automatically regulate the amount of heat that passes through it. When conditions are warm and moist, such as those near a sweating body, the fabric allows infrared radiation (heat) to pass through. When conditions become cooler and drier, the fabric reduces the heat that escapes. The development was reported in the February 8, 2019 issue of the journal Science.

The researchers created the fabric from specially engineered yarn coated with a conductive metal. Under hot, humid conditions, the strands of yarn compact and activate the coating, which changes the way the fabric interacts with infrared radiation. They refer to the action as “gating” of infrared radiation, which acts as a tunable blind to transmit or block heat.

“This is the first technology that allows us to dynamically gate infrared radiation,” said YuHuang Wang, a professor of chemistry and biochemistry at UMD and one of the paper’s corresponding authors who directed the studies. 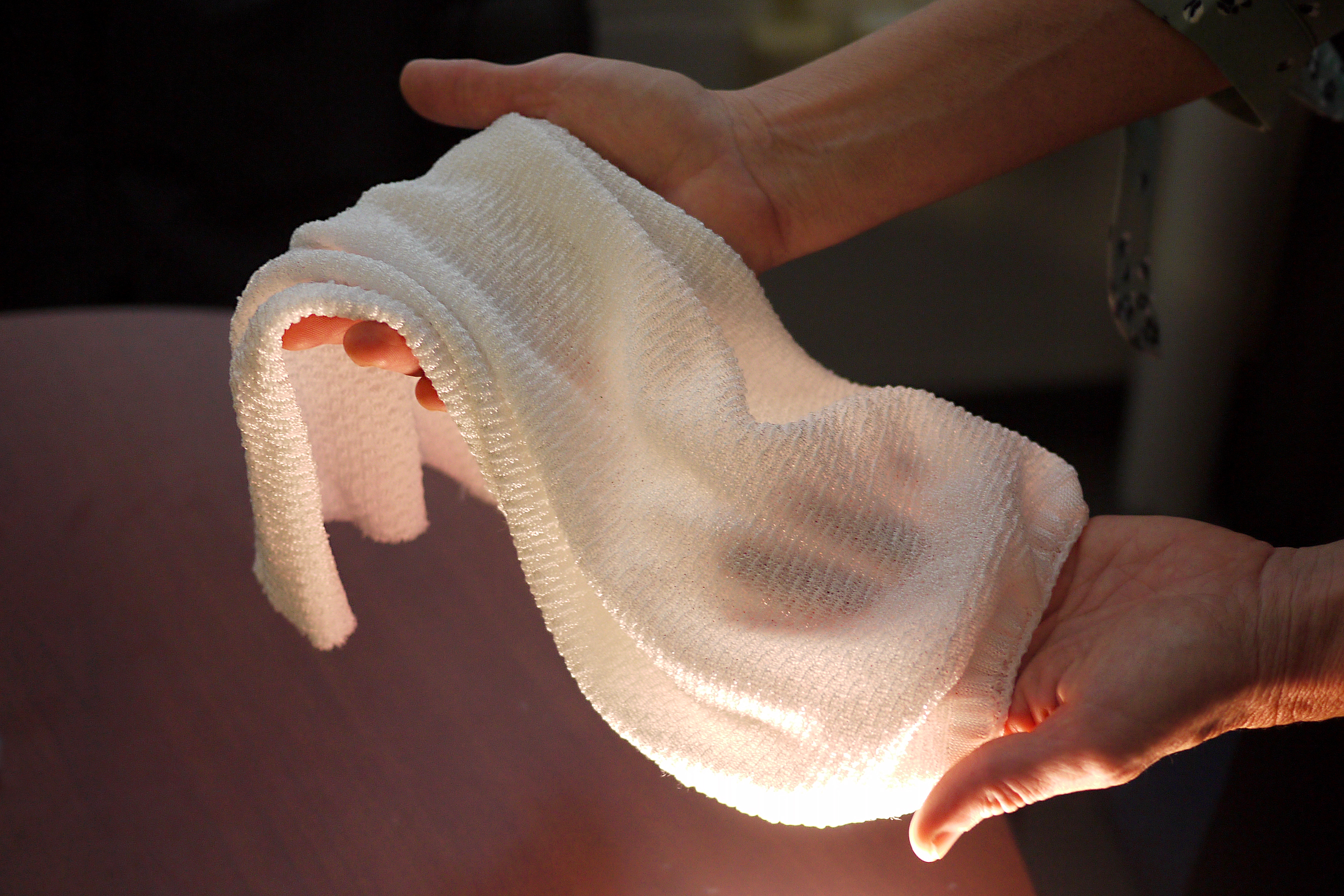 The base yarn for this new textile is created with fibers made of two different synthetic materials—one absorbs water and the other repels it. The strands are coated with carbon nanotubes, a special class of lightweight, carbon-based, conductive metal. Because materials in the fibers both resist and absorb water, the fibers warp when exposed to humidity such as that surrounding a sweating body. That distortion brings the strands of yarn closer together, which does two things. First, it opens the pores in the fabric. This has a small cooling effect because it allows heat to escape. Second, and most importantly, it modifies the electromagnetic coupling between the carbon nanotubes in the coating.

“You can think of this coupling effect like the bending of a radio antenna to change the wavelength or frequency it resonates with,” Wang said. “It’s a very simplified way to think of it, but imagine bringing two antennae close together to regulate the kind of electromagnetic wave they pick up. When the fibers are brought closer together, the radiation they interact with changes. In clothing, that means the fabric interacts with the heat radiating from the human body.”

Depending on the tuning, the fabric either blocks infrared radiation or allows it to pass through. The reaction is almost instant, so before people realize they’re getting hot, the garment could already be cooling them down. On the flip side, as a body cools down, the dynamic gating mechanism works in reverse to trap in heat.

“The human body is a perfect radiator. It gives off heat quickly,” said Min Ouyang, a professor of physics at UMD and the paper’s other corresponding author. “For all of history, the only way to regulate the radiator has been to take clothes off or put clothes on. But this fabric is a true bidirectional regulator.” 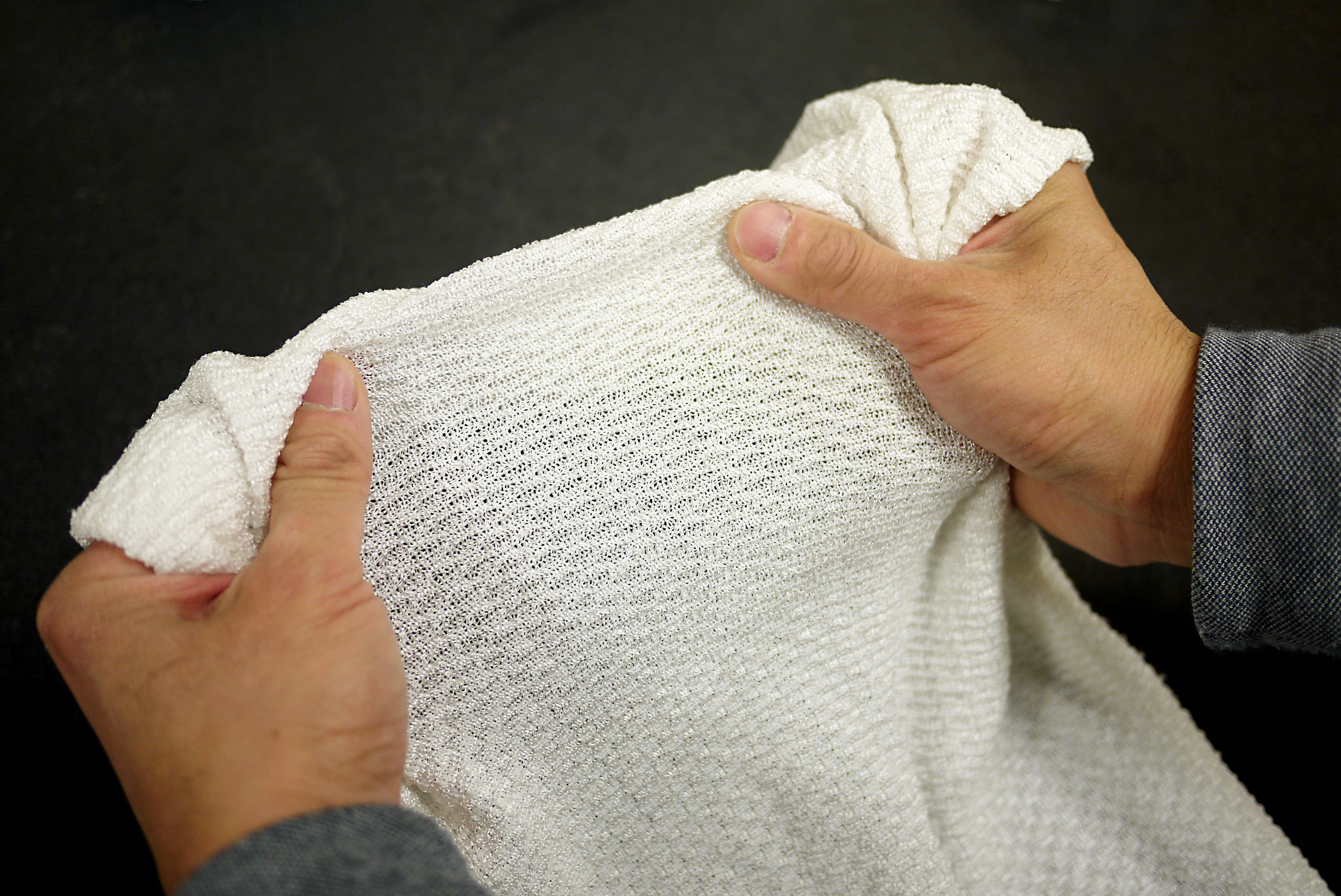 According to the Science paper, this is first textile shown to be able to regulate heat exchange with the environment.

“This pioneering work provides an exciting new switchable characteristic for comfort-adjusting clothing,” said Ray Baughman, a professor of chemistry at the University of Texas who was not involved in the study. “Textiles were known that increase porosity in response to sweat or increasing temperature, as well as textiles that transmit the infrared radiation associated with body temperatures. However, no one before had found a way to switch both the porosity and infrared transparency of a textile so as to provide increased comfort in response to environmental conditions.”

More work is needed before the fabric can be commercialized, but according to the researchers, materials used for the base fiber are readily available and the carbon coating can be easily added during standard dyeing process.

“I think it’s very exciting to be able to apply this gating phenomenon to the development of a textile that has the ability to improve the functionality of clothing and other fabrics,” Ouyang said.

This work was supported by the Advanced Research Projects Agency-Energy (ARPA-E), U.S. Department of Energy, as part of its “Delivering Efficient Local Thermal Amenities (DELTA)” program (Award No. DE-AR0000527). The content of this article does not necessarily reflect the views of this organization.

Media Relations Contact: Kimbra Cutlip, 301-405-9463, This email address is being protected from spambots. You need JavaScript enabled to view it.

About the College of Computer, Mathematical, and Natural Sciences

The College of Computer, Mathematical, and Natural Sciences at the University of Maryland educates more than 9,000 future scientific leaders in its undergraduate and graduate programs each year. The college's 10 departments and more than a dozen interdisciplinary research centers foster scientific discovery with annual sponsored research funding exceeding $175 million.