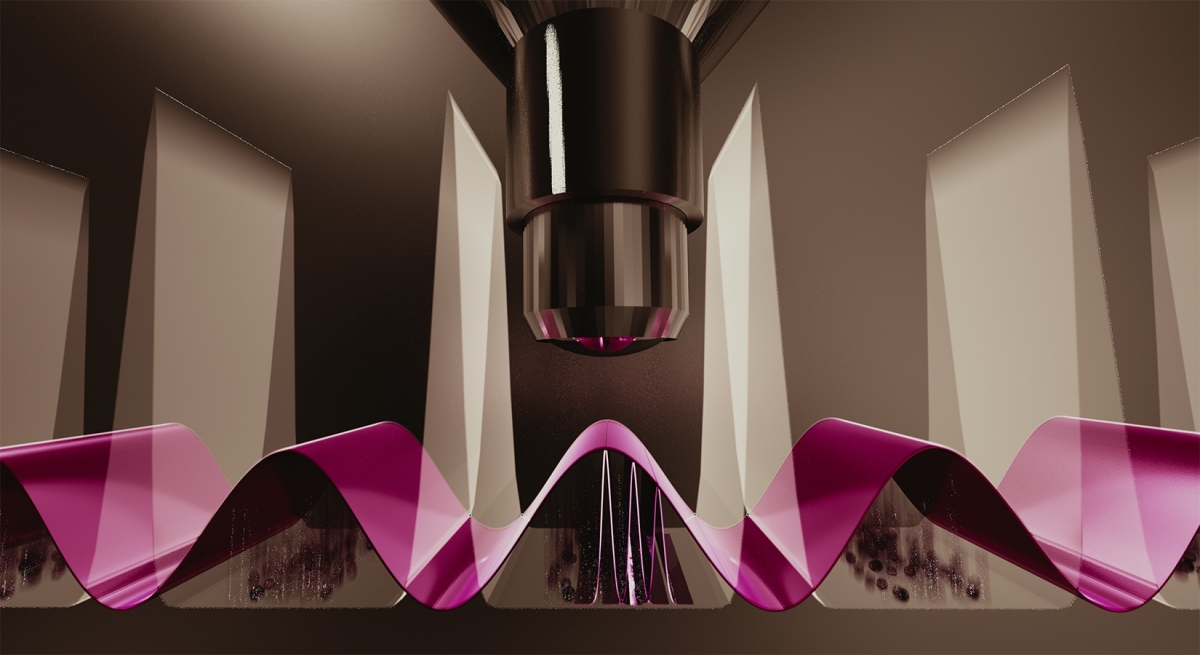 The team has used laser light to construct an image of an atomic wave function (shown in purple). The graphic is an artistic depiction of this process, showing a microscope objective trained on atoms (spheres) suspended in an optical lattice (tall white waves). The team's technique reveals information about an atomic wave function in unprecedented detail.

JQI researchers have demonstrated a new way to obtain the essential details that describe an isolated quantum system, such as a gas of atoms, through direct observation. The new method gives information about the likelihood of finding atoms at specific locations in the system with unprecedented spatial resolution. With this technique, scientists can obtain details on a scale of tens of nanometers—smaller than the width of a virus.

The new experiments use an optical lattice—a web of laser light that suspends thousands of individual atoms—to determine the probability that an atom might be at any given location. Because each individual atom in the lattice behaves like all the others, a measurement on the entire group of atoms reveals the likelihood of an individual atom to be in a particular point in space.

Published in the journal Physical Review X, the technique (similar work was published simultaneously by a group at the University of Chicago) can yield the likelihood of the atoms’ locations at well below the wavelength of the light used to illuminate the atoms—50 times better than the limit of what optical microscopy can normally resolve.

“It’s a demonstration of our ability to observe quantum mechanics,” says JQI Fellow and NIST physicist Trey Porto, one of the researchers behind the effort. “It hasn’t been done with atoms with anywhere near this precision.”

To understand a quantum system, physicists talk frequently about its “wave function.” It is not just an important detail; it’s the whole story. It contains all the information you need to describe the system.

“It’s the description of the system,” says JQI Fellow and UMD physics professor Steve Rolston, another of the paper’s authors. “If you have the wave function information, you can calculate everything else about it—such as the object’s magnetism, its conductivity and its likelihood to emit or absorb light.”

While the wave function is a mathematical expression and not a physical object, the team’s method can reveal the behavior that the wave function describes: the probabilities that a quantum system will behave in one way versus another. In the world of quantum mechanics, probability is everything.

Among the many strange principles of quantum mechanics is the idea that before we measure their positions, objects may not have a pinpointable location. The electrons surrounding the nucleus of an atom, for example, do not travel in regular planetlike orbits, contrary to the image some of us were taught in school. Instead, they act like rippling waves, so that an electron itself cannot be said to have a definite location. Rather, the electrons reside within fuzzy regions of space.

All objects can have this wavelike behavior, but for anything large enough for unaided eyes to see, the effect is imperceptible and the rules of classical physics are in force—we don’t notice buildings, buckets or breadcrumbs spreading out like waves. But isolate a tiny object such as an atom, and the situation is different because the atom exists in a size realm where the effects of quantum mechanics reign supreme. It’s not possible to say with certainty where it’s located, only that it will be found somewhere. The wave function provides the set of probabilities that the atom will be found in any given place.

Quantum mechanics is well-enough understood—by physicists, anyway—that for a simple-enough system, experts can calculate the wave function from first principles without needing to observe it. Many interesting systems are complicated, though.

“There are quantum systems that can’t be calculated because they are too difficult,” Rolston says—such as molecules made of several large atoms. “This approach could help us understand those situations.”

As the wave function describes only a set of probabilities, how can physicists get a complete picture of its effects in short order? The team’s approach involves measuring a large number of identical quantum systems at the same time and combining the results into one overall picture. It’s sort of like rolling 100,000 pairs of dice at the same time—each roll gives a single result, and contributes a single point on the probability curve showing the values of all the dice.

What the team observed were the positions of the roughly 100,000 atoms of ytterbium the optical lattice suspends in its lasers. The ytterbium atoms are isolated from their neighbors and restricted to moving back and forth along a one-dimensional line segment. To get a high-resolution picture, the team found a way to observe narrow slices of these line segments, and how often each atom showed up in its respective slice. After observing one region, the team measured another, until it had the whole picture.

Rolston says that while he hasn’t yet thought of a “killer app” that would take advantage of the technique, the mere fact that the team has directly imaged something central to quantum research fascinates him.

“It’s not totally obvious where it will be used, but it’s a new technique that offers new opportunities,” he said. “We’ve been using an optical lattice to capture atoms for years, and now it’s become a new kind of measurement tool.”

The original story was written by C. Boutin/NIST. Minor modifications were made for posting to this website.