To Tune Up Your Quantum Computer, Better Call an AI Mechanic

A high-end race car engine needs all its components tuned and working together precisely to deliver top-quality performance. The same can be said about the processor inside a quantum computer, whose delicate bits must be adjusted in just the right way before it can perform a calculation. Who’s the right mechanic for this quantum tuneup job? According to a team that includes scientists at JQI and the National Institute of Standards and Technology (NIST), it’s an artificial intelligence, that’s who.

The team’s paper in the journal Physical Review Applied outlines a way to teach an AI to make an interconnected set of adjustments to tiny quantum dots, which are among the many promising devices for creating the quantum bits, or “qubits,” that would form the switches in a quantum computer’s processor. 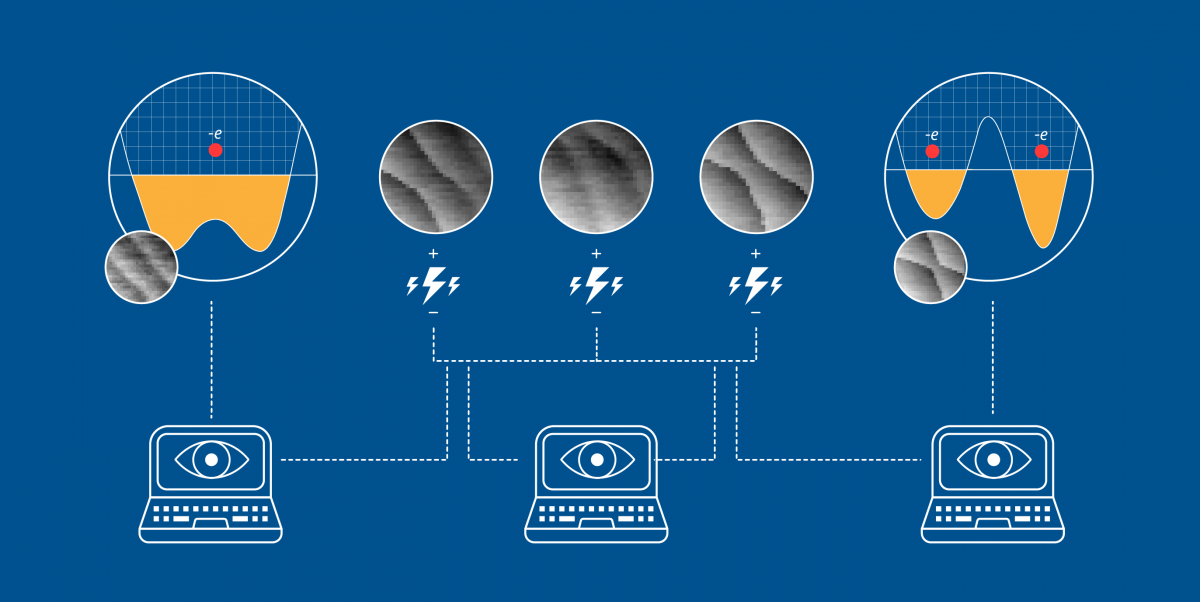 This artist's conception shows how the research team used artificial intelligence (AI) and other computational techniques to tune a quantum dot device for use as a qubit. The dot's electrons are corralled by electrical gates, whose adjustable voltages raise and lower the "peaks" and "valleys" in the large circles. As the gates push the electrons around, sensitive measurement of the moving electrons creates telltale lines in the black and white images, which the AI uses to judge the state of the dot and then make successive adjustments to the gate voltages. Eventually the AI converts a single dot (leftmost large circle) to a double dot (rightmost), a process that takes tedious hours for a human operator. (Credit: B. Hayes/NIST)

Precisely tweaking the dots is crucial for transforming them into properly functioning qubits, and until now the job had to be done painstakingly by human operators, requiring hours of work to create even a small handful of qubits for a single calculation.

A practical quantum computer with many interacting qubits would require far more dots — and adjustments — than a human could manage, so the team’s accomplishment might bring quantum dot-based processing closer from the realm of theory to engineered reality.

“Quantum computer theorists imagine what they could do with hundreds or thousands of qubits, but the elephant in the room is that we can actually make only a handful of them work at a time,” said Justyna Zwolak, a NIST mathematician. “Now we have a path forward to making this real.”

A quantum dot typically contains electrons that are confined to a tight boxlike space in a semiconductor material. Forming the box’s walls are several metallic electrodes (so-called gates) above the semiconductor surface that have electric voltage applied to them, influencing the quantum dot’s position and number of electrons. Depending on their position relative to the dot, the gates control the electrons in different ways.

To make the dots do what you want — act as one sort of qubit logic switch or another, for example — the gate voltages must be tuned to just the right values. This tuning is done manually, by measuring currents flowing through the quantum dot system, then changing the gate voltages a bit, then checking the current again. And the more dots (and gates) you involve, the harder it is to tune them all simultaneously so that you get qubits that work together properly.

In short, this isn’t a gig that any human mechanic would feel bad about losing to a machine.

“It’s usually a job done by a graduate student,” said graduate student Tom McJunkin of the University of Wisconsin-Madison’s physics department and a co-author on the paper. “I could tune one dot in a few hours, and two might take a day of twiddling knobs. I could do four, but not if I need to go home and sleep. As this field grows, we can’t spend weeks getting the system ready — we need to take the human out of the picture.”

Pictures, though, are just what McJunkin was used to looking at while tuning the dots: The data he worked with came in the form of visual images, which the team realized that AI is good at recognizing. AI algorithms called convolutional neural networks have become the go-to technique for automated image classification, as long as they are exposed to lots of examples of what they need to recognize. So the team’s Sandesh Kalantre, under supervision from Jake Taylor, a Fellow of JQI and the Joint Center for Quantum Information and Computer Science (QuICS), created a simulator that would generate thousands of images of quantum dot measurements they could feed to the AI as a training exercise.

"The simulator allows us to create a large dataset of artificial devices, which can model the real devices one might encounter in the lab," said Kalantre, a Lanczos Graduate Fellow at QuICS.

The team started small, using a setup of two quantum dots, and they verified that within certain constraints their trained AI could auto-tune the system to the setup they desired. It wasn’t perfect — they identified several areas they need to work on to improve the approach’s reliability — and they can’t use it to tune thousands of interconnected quantum dots as yet. But even at this early stage its practical power is undeniable, allowing a skilled researcher to spend valuable time elsewhere.

"This concept — using physical modeling to improve automated systems with machine learning — opens up new vistas for a wide range of experimental systems," said Taylor. "And not just in physics."

This story was originally published by NIST News. It has been adapted with minor changes here.