Scientists on the hunt for an unconventional kind of superconductor have produced the most compelling evidence to date that they’ve found one. In a pair of papers, researchers at the University of Maryland’s (UMD) Quantum Materials Center (QMC) and colleagues have shown that uranium ditelluride (or UTe2 for short) displays many of the hallmarks of a topological superconductor—a material that may unlock new ways to build quantum computers and other futuristic devices.

“Nature can be wicked,” says Johnpierre Paglione, a professor of physics at UMD, the director of QMC and senior author on one of the papers. “There could be other reasons we're seeing all this wacky stuff, but honestly, in my career, I've never seen anything like it.”

All superconductors carry electrical currents without any resistance. It’s kind of their thing. The wiring behind your walls can’t rival this feat, which is one of many reasons that large coils of superconducting wires and not normal copper wires have been used in MRI machines and other scientific equipment for decades. 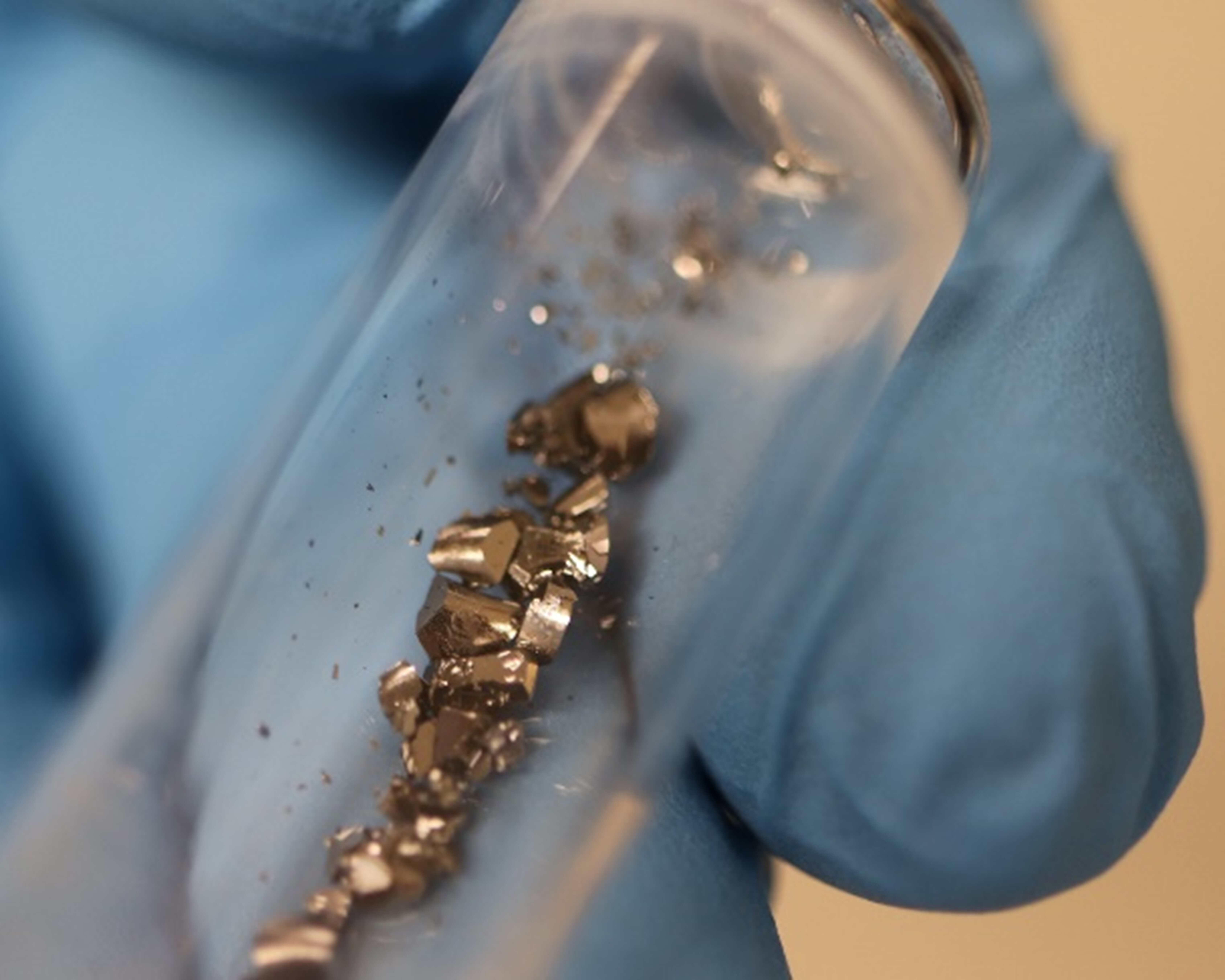 Crystals of a promising topological superconductor grown by researchers at the University of Maryland’s Quantum Materials Center. (Credit: Sheng Ran/NIST).

But superconductors achieve their super-conductance in different ways. Since the early 2000s, scientists have been looking for a special kind of superconductor, one that relies on an intricate choreography of the subatomic particles that actually carry its current.

This choreography has a surprising director: a branch of mathematics called topology. Topology is a way of grouping together shapes that can be gently transformed into one another through pushing and pulling. For example, a ball of dough can be shaped into a loaf of bread or a pizza pie, but you can’t make it into a donut without poking a hole in it. The upshot is that, topologically speaking, a loaf and a pie are identical, while a donut is different. In a topological superconductor, electrons perform a dance around each other while circling something akin to the hole in the center of a donut.

Unfortunately, there’s no good way to slice a superconductor open and zoom in on these electronic dance moves. At the moment, the best way to tell whether or not electrons are boogieing on an abstract donut is to observe how a material behaves in experiments. Until now, no superconductor has been conclusively shown to be topological, but the new papers show that UTe2 looks, swims and quacks like the right kind of topological duck.

One study, by Paglione’s team in collaboration with the group of Aharon Kapitulnik at Stanford University, reveals that not one but two kinds of superconductivity exist simultaneously in UTe2. Using this result, as well as the way light is altered when it bounces off the material (in addition to previously published experimental evidence), they were able to narrow down the types of superconductivity that are present to two options, both of which theorists believe are topological.  They published their findings on July 15, 2021, in the journal Science.

In another study, a team led by Steven Anlage, a professor of physics at UMD and a member of QMC, revealed unusual behavior on the surface of the same material. Their findings are consistent with the long-sought-after phenomenon of topologically protected Majorana modes. Majorana modes, exotic particles that behave a bit like half of an electron, are predicted to arise on the surface of topological superconductors. These particles particularly excite scientists because they might be a foundation for robust quantum computers. Anlage and his team reported their results in a paper published May 21, 2021 in the journal Nature Communications.

Superconductors only reveal their special characteristics below a certain temperature, much like water only freezes below zero Celsius. In normal superconductors, electrons pair up into a two-person conga line, following each other through the metal. But in some rare cases, the electron couples perform a circular dance around each other, more akin to a waltz. The topological case is even more special—the circular dance of the electrons contains a vortex, like the eye amidst the swirling winds of a hurricane. Once electrons pair up in this way, the vortex is hard to get rid of, which is what makes a topological superconductor distinct from one with a simple, fair-weather electron dance.

Back in 2018, Paglione’s team, in collaboration with the team of Nicholas Butch, an adjunct associate professor of physics at UMD and a physicist at the National Institute of Standards and Technology (NIST), unexpectedly discovered that UTe2 was a superconductor. Right away, it was clear that it wasn’t your average superconductor. Most notably, it seemed unphased by large magnetic fields, which normally destroy superconductivity by splitting up the electron dance couples. This was the first clue that the electron pairs in UTe2 hold onto each other more tightly than usual, likely because their paired dance is circular. This garnered a lot of interest and further research from others in the field.

“It's kind of like a perfect storm superconductor,” says Anlage. “It's combining a lot of different things that no one's ever seen combined before.”

In the new Science paper, Paglione and his collaborators reported two new measurements that reveal the internal structure of UTe2. The UMD team measured the material’s specific heat, which characterizes how much energy it takes to heat it up by one degree. They measured the specific heat at different starting temperatures and watched it change as the sample became superconducting.

The two jumps suggested that electrons in UTe2 can pair up to perform either of two distinct dance patterns.

In a second measurement, the Stanford team shone laser light onto a piece of UTe2 and noticed that the light reflecting back was a bit twisted. If they sent in light bobbing up and down, the reflected light bobbed mostly up and down but also a bit left and right. This meant something inside the superconductor was twisting up the light and not untwisting it on its way out.

To sort out what all this meant for the electrons dancing in the superconductor, the researchers enlisted the help of Daniel F. Agterberg, a theorist and professor of physics at the University of Wisconsin-Milwaukee and a co-author of the Science paper. According to the theory, the way uranium and tellurium atoms are arranged inside the UTe2 crystal allows electron couples to team up in eight different dance configurations. Since the specific heat measurement shows that two dances are going on at the same time, Agterberg enumerated all the different ways to pair these eight dances together. The twisted nature of the reflected light and the coercive power of a magnetic field along the up-down axis cut the possibilities down to four. Previous results showing the robustness of UTe2’s superconductivity under large magnetic fields further constrained it to only two of those dance pairs, both of which form a vortex and indicate a stormy, topological dance.

“What's interesting is that given the constraints of what we've seen experimentally, our best theory points to a certainty that the superconducting state is topological,” says Paglione.

If the nature of superconductivity in a material is topological, the resistance will still go to zero in the bulk of the material, but on the surface something unique will happen: Particles, known as Majorana modes, will appear and form a fluid that is not a superconductor. These particles also remain on the surface despite defects in the material or small disruptions from the environment. Researchers have proposed that, thanks to the unique properties of these particles, they might be a good foundation for quantum computers. Encoding a piece of quantum information into several Majoranas that are far apart makes the information virtually immune to local disturbances that, so far, have been the bane of quantum computers.

Anlage’s team wanted to probe the surface of UTe2 more directly to see if they could spot signatures of this Majorana sea. To do that, they sent microwaves towards a chunk UTe2, and measured the microwaves that came out on the other side. They compared the output with and without the sample, which allowed them to test properties of the bulk and the surface simultaneously.

The surface leaves an imprint on the strength of the microwaves, leading to an output that bobs up and down in sync with the input, but slightly subdued. But since the bulk is a superconductor, it offers no resistance to the microwaves and doesn’t change their strength. Instead, it slows them down, causing delays that make the output bob up and down out of sync with the input. By looking at the out-of-sync parts of the response, the researchers determined how many of the electrons inside the material participate in the paired dance at various temperatures. They found that the behavior agreed with the circular dances suggested by Paglione’s team.

“The surface behaves differently from any superconductor we've ever looked at,” Anlage says. “And then the question is ‘What's the interpretation of that anomalous result?’ And one of the interpretations, which would be consistent with all the other data, is that we have this topologically protected surface state that is kind of like a wrapper around the superconductor that you can't get rid of.”

It might be tempting to conclude that the surface of UTe2 is covered with a sea of Majorana modes and declare victory. However, extraordinary claims require extraordinary evidence. Anlage and his group have tried to come up with every possible alternative explanation for what they were observing and systematically ruled them out, from oxidization on the surface to light hitting the edges of the sample. Still, it is possible a surprising alternative explanation is yet to be discovered.

“In the back of your head you're always thinking ‘Oh, maybe it was cosmic rays’, or ‘Maybe it was something else,’” says Anlage. “You can never 100% eliminate every other possibility.”

For Paglione’s part, he says the smoking gun will be nothing short of using surface Majorana modes to perform a quantum computation. However, even if the surface of UTe2 truly has a bunch of Majorana modes, there’s currently no straightforward way to isolate and manipulate them. Doing so might be more practical with a thin film of UTe2 instead of the (easier to produce) crystals that were used in these recent experiments.

Whether UTe2 proves to be the long-awaited topological superconductor or just a pigeon that learned to swim and quack like a duck, both Paglione and Anlage are excited to keep finding out what the material has in store.

“It's pretty clear though that there's a lot of cool physics in the material,” Anlage says. “Whether or not it’s Majoranas on the surface is certainly a consequential issue, but it's exploring novel physics which is the most exciting stuff.”

Special thanks to Jay Sau, a professor of physics at UMD and a JQI Fellow, for helpful discussions while reporting this story.