Beyond Higgs: The Search for New Particles That Could Solve Mysteries of the Universe

Despite its cosmic importance, scientists couldn’t prove the Higgs boson even existed until 2012, when they smashed protons together at the most powerful particle accelerator ever built: the Large Hadron Collider (LHC). A decade later, this massive machine, built in a tunnel beneath the France-Switzerland border, is up and running again after a series of upgrades.

As the search for new particles starts anew, researchers like Assistant Professor of Physics Manuel Franco Sevilla find themselves wondering if they will discover anything beyond Higgs. 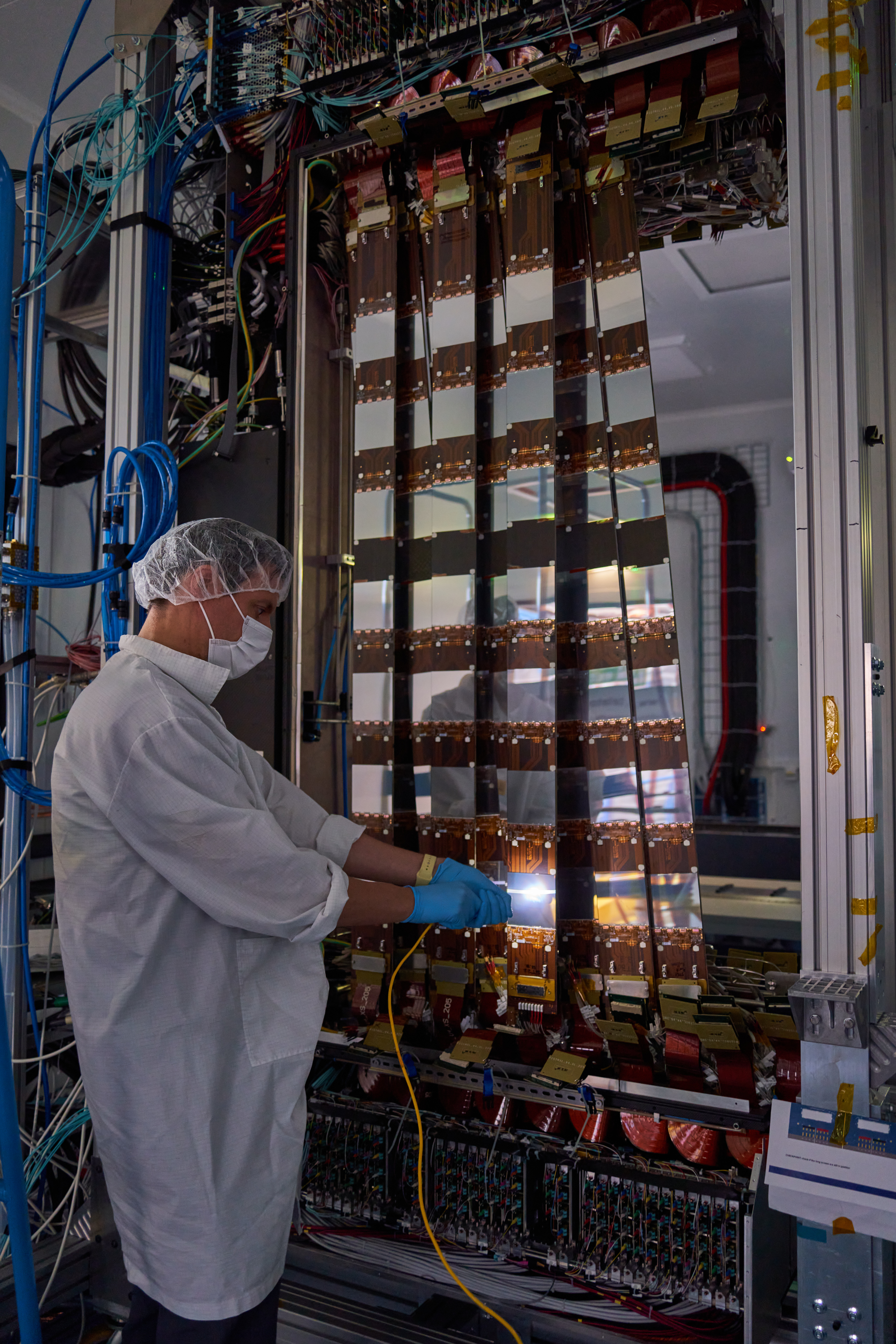 UMD Assistant Professor of Physics Manuel Franco Sevilla is helping to upgrade the Large Hadron Collider (LHC) at CERN in Switzerland. In the above photo, he is shining a light on silicon sensors to measure whether their dark current increases—a sign that they are properly connected. Photo courtesy of Manuel Franco Sevilla.

“It’s a tough question because particle physics is at a juncture,” said Franco Sevilla, who is working at the LHC this semester. “It’s possible that we are currently in what physicists call a ‘nightmare scenario,’ where we discovered the Higgs, but after that, there’s a big desert. According to this theory, we will not be able to find anything new with our current technology.”

This is the worst-case scenario, but not the only possible outcome. Some scientists say the LHC could make another discovery on par with the Higgs boson, potentially identifying new particles that explain the origin of dark matter or the mysterious lack of antimatter throughout the universe. Others say new colliders—more powerful and precise than their predecessors—must be built to bring the field into a new era.

There are no easy answers, but Franco Sevilla and several other faculty members in UMD’s Department of Physics are rising to the challenge. Some are working directly with the LHC and future collider proposals, while others are developing theories that could solve life’s biggest mysteries. All of them, in their own way, are advancing the ever-changing field of particle physics.

As Franco Sevilla will tell you, there’s beauty all around—if you know where to look. He is one of the researchers who uses the LHC’s high-powered collisions to study a particle called the beauty quark—b quark for short. It’s one of the components of “flavor physics,” which observes the interactions between six “flavors,” or varieties, of elementary particles called quarks and leptons.

Because these particles sometimes behave in unexpected ways, Franco Sevilla believes that flavor physics might lead to breakthroughs that justify future studies in this field—and possibly even the need for a new particle collider.

“Some of the most promising things that will break the ‘nightmare scenario’ and allow us to find something are coming from flavor physics,” he said. “We still haven't fully discovered something new, but we have a number of hints, including the famous ‘b anomalies.’”

These anomalies are instances where the b quark decayed differently than predicted by the Standard Model, the prevailing theory of particle physics. This suggests that something might exist beyond this model—which, ever since the 1970s, has helped explain the fundamental particles and forces that shape our world.

Some mysteries remain, though. Physicists still don’t know the origin of dark matter—an enigmatic substance that exerts a gravitational force on visible matter—or why there’s so much matter and so little antimatter in the universe.

Sarah Eno, a UMD physics professor who has conducted research at particle accelerators around the world, including the LHC, said these answers will only come from collider experiments. 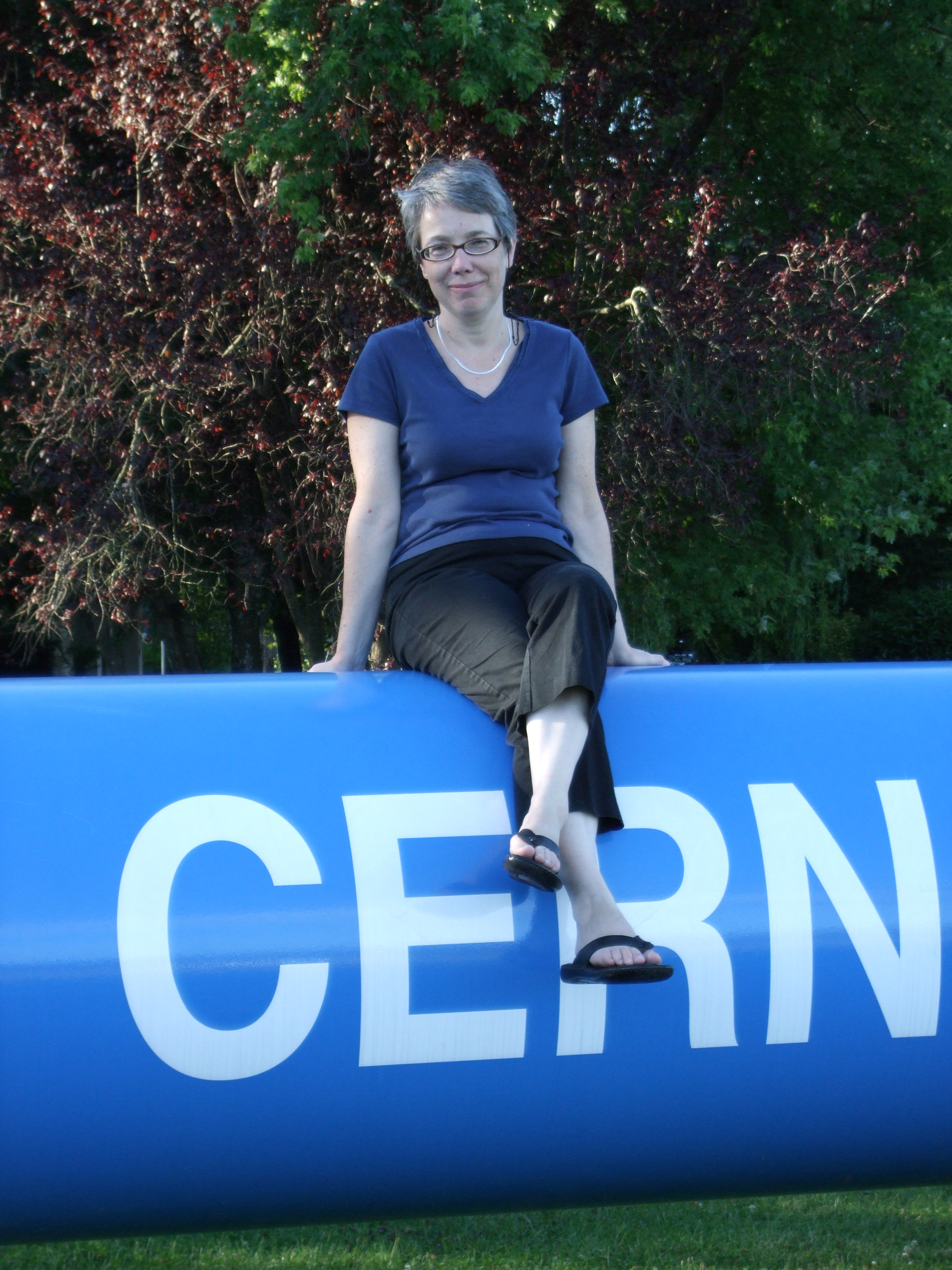 Sarah Eno, a physics professor at UMD, sits atop a model of a Large Hadron Collider (LHC) dipole magnet at CERN about 10 years ago. At the time, she was participating in LHC experiments and frequently spent her summers at the lab in Switzerland. Credit: Meenakshi Narain.
“What is the nature of dark matter? Nobody has any idea,” Eno said. “We know it interacts via gravity, but we don’t know whether it has any other kinds of interactions. And only an accelerator can tell us that.”

After the third (and current) run of the LHC ends, the collider’s accelerator will be upgraded in 2029 to “crank up the performance,” according to the European Organization for Nuclear Research (CERN), which houses the collider.

With the added benefit of stronger magnets and higher-intensity beams, this final round of experiments could be a game-changer. But once that ends, Eno said the LHC will have reached its limit in terms of energy output, lowering the odds of any new discoveries. The logical next step, she said, would be to construct a new collider capable of propelling the field of particle physics forward.

“The field is now trying to decide what the next machine is,” Eno said.

Around the globe, there are various proposals on the table. There is a significant push for another proton collider in the same vein as the LHC, except bigger and more powerful. Electron-positron colliders—both linear and circular in shape—have also been proposed in China, Japan and Switzerland.

Eno is one of the physicists leading the charge for the construction of an electron-positron collider at CERN. It would be the first stage of the proposed Future Circular Collider (FCC), which would be four times longer than the LHC. By the late 2050s, it would be upgraded to a proton collider, with an energy capacity roughly seven times that of the LHC. Eno, who was appointed one of the U.S. representatives for this project, said the electron-positron collider would allow physicists to study the Higgs boson with significantly higher precision.

“When an electron and positron annihilate, all their energy becomes new states of matter,” Eno said. “This means that when you’re trying to reconstruct the final state, you know the total energy of that final state. This allows you to do much more precise measurements.”

This proposal does come with some challenges. Circular colliders radiate off a lot of energy, making it difficult to accelerate electrons to high energy. Eno said this can be avoided by building a massive collider with a long tunnel (to the tune of 62 miles, in the case of the FCC), preventing electrons from losing steam as they whip around sharp corners.

The radiation problem has pushed some physicists towards another theoretical possibility: a muon collider. Muons are subatomic particles that are like electrons, but 207 times heavier, which keeps them from radiating as much. This would make them ideal candidates for collider research—if only they didn’t decay in 2.2 microseconds.

“If you talk to the muon collider proponents, their faces light up because it’s such a challenge,” Eno said. “And who doesn’t like a challenge?”

One of Eno’s colleagues at UMD—Distinguished University Professor and theoretical physicist Raman Sundrum—endorses the muon collider idea. So much so that he and a team of physicists wrote a paper titled “The muon smasher’s guide,” which appeared in Reports on Progress in Physics in July 2022.

“We build colliders not to confirm what we already know, but to explore what we do not,” the research team wrote in their paper. “In the wake of the Higgs boson’s discovery, the question is not whether to build another collider, but which collider to build.”

They made the case for the world’s first muon smasher, arguing that these collisions would be “far cleaner” than proton collisions, which occur at the LHC. Unlike protons—a composite object made of quarks and gluons—muons are elementary particles with no smaller components. This would let physicists see only what they want to see, without any distractions.

“Muon collisions would make it easier to diagnose what’s going on,” Sundrum said. “When something extraordinary happens, it doesn’t get dwarfed by all of the mundane crashing of many parts.”

Considering that the Higgs boson only appears once in about a billion collisions at the LHC, this level of clarity and precision could make a world of difference. However, the more the field of particle physics advances, the more challenging it is to find something new.

“The Higgs was a needle in the haystack, but discovering newer particles could be even subtler and harder,” Sundrum said.

Despite these challenges, the LHC could still make a major discovery. Sundrum continues to develop theories that guide and inspire the field, including the idea that the LHC could find a “parent particle” that gave rise to all protons in the universe. If this comes to fruition, it would be worth building new colliders that could validate the LHC’s initial findings and provide a more complete picture of why matter dominates over antimatter in the universe, Sundrum said.

In the coming years and decades, physicists will continue to debate the pros and cons of various collider proposals. The outcome will depend partly on scientific advancements, and partly on political will and funding. Sundrum said it’s not cheap to build a collider—with some projects expected to cost $10 billion—but the discoveries that could come from these experiments are priceless.

“An enormous number of people find it very moving and interesting to know what it’s all about, in terms of where the universe came from, what it means and how the laws work,” Sundrum said. “Individually these experiments are expensive, but as a planet, I think we can easily afford to do it.”