John Martyn Takes Physics From the Lab to the Skate Park 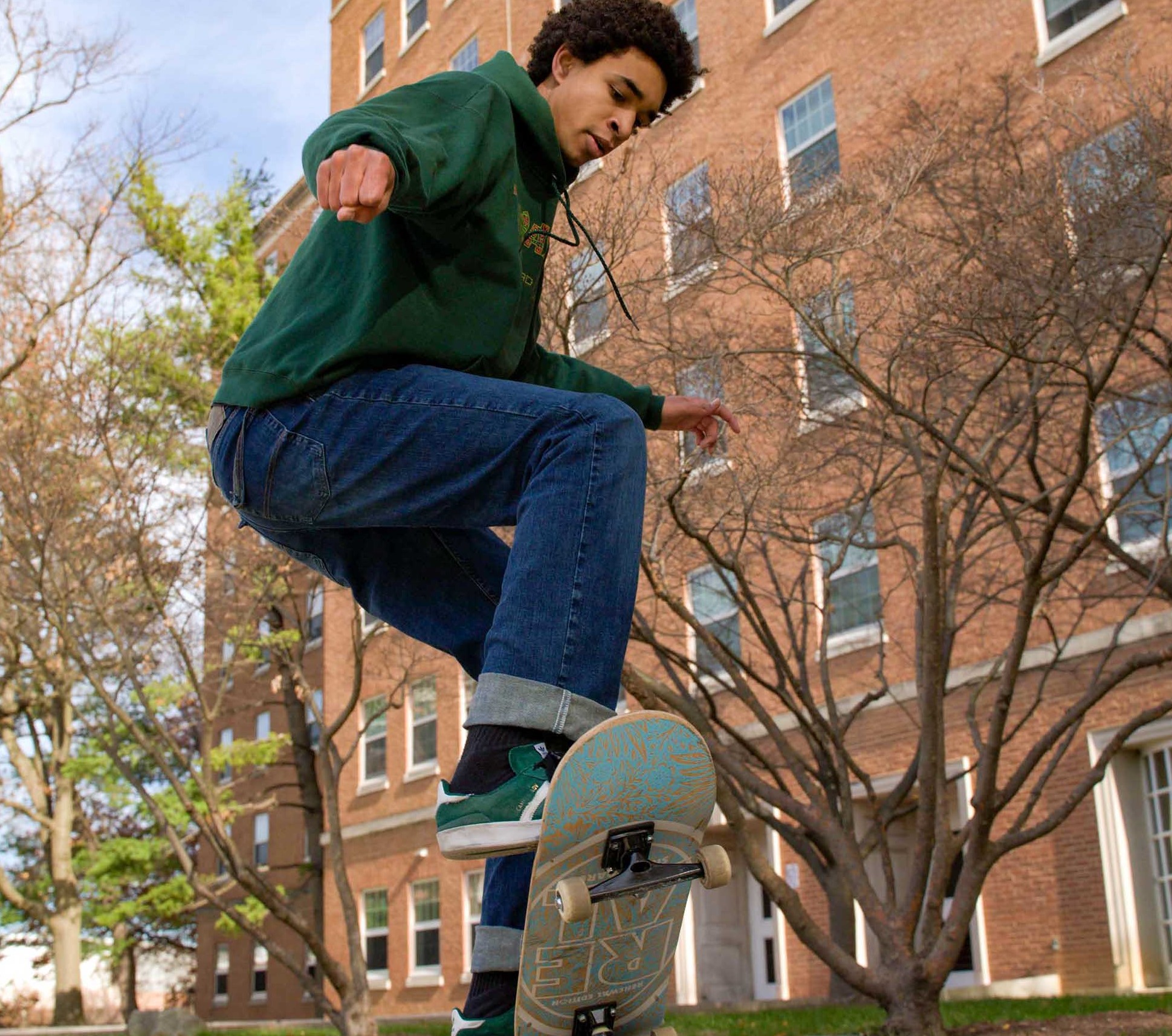 For the past four years, John Martyn could be seen whipping across campus on his skateboard. As he traveled from class to the lab on his board, Martyn was mastering the ultimate balancing act.

While the recent physics graduate wasn’t doing any calculations while he was on his skateboard, he knew physics was still at play.

“Certain ways that the board can flip are limited by physical principles,” said Martyn, who graduated in December 2019 with his bachelor’s degree in physics and a University Honors citation. “One theorem tells you that a certain way for a skateboard to rotate is actually unstable, so doing a trick that way is very difficult.”

Martyn started skateboarding 10 years ago, after he and his brother joined a neighbor they saw doing tricks outside. A past president of the UMD Skateboarding Club, Martyn appreciates that skateboarding has a way of rewarding riders for their hard work and effort.

“A lot of times when you're trying to learn a trick or do something that you haven't done before, it can take upwards of an hour. So when you finally land it and all of your friends celebrate, it’s a really good feeling,” Martyn said.

In the Skateboarding Club, members recorded videos of each other performing tricks and shared them on Instagram. They’ve also hosted skating competitions known as Games of S.K.A.T.E. and premiered a skateboarding film they made called “EXTRACURRICULAR.”

Outside of the skate park, Martyn spent his days studying physics equations in class and in the research lab. He recently published a first-author paper in the journal Physical Review A with UMD Physics Assistant Professor Brian Swingle.

Martyn joined Swingle’s group in 2017 to study quantum information and condensed matter. There, Martyn developed a method to prepare approximate thermal states on a quantum computer that may one day enable researchers to study novel condensed matter systems and models of black holes. In addition to the published paper, Martyn presented this work at the 2019 American Physical Society March Meeting and the 2019 National Collegiate Research Conference.

“John really strives for perfection in his work and has already demonstrated many of the skills needed to function as an independent researcher,” Swingle said.

Martyn spent the summer of 2018 with the Laser Interferometer Gravitational-Wave Observatory (LIGO) team at the California Institute of Technology, where he investigated quantum noise in LIGO’s gravitational wave detectors. He constructed optical components and other electronics for a prototype detector with improved sensitivity. For this work, Martyn received the 2018 Carl Albert Rouse Undergraduate Research Fellowship from the National Society of Black Physicists.

With his degree in hand, Martyn will spend the spring interning at Google X, working on quantum computation research. He will return to campus in April to continue working on his research with Swingle’s group. He is also applying to graduate programs, with plans to pursue a Ph.D. in theoretical physics with a focus on quantum information and condensed matter physics.

“I want to do research once I’m out of school, ideally at a university and relating to physics,” Martyn said. “Being at Maryland has really helped me sharpen my interests and figure out my trajectory.”