During the first weekend of October 2016, the University of Maryland Department of Physics and the National Institute of Standards and Technology (NIST) held the inaugural Conference for Undergraduate Underrepresented Minorities in Physics (CU2MiP), bringing students from several universities to this campus for networking, career advice and discussion of research opportunities. In 2014, UMD Department's Director of Education, Donna Hammer and NIST's Katharine Blodgett Gebbie and Angela Hight-Walker organized a very successful Mid-Atlantic Conference of Undergraduate Women in Physics, which inspired their vision to establish CU2MiP. 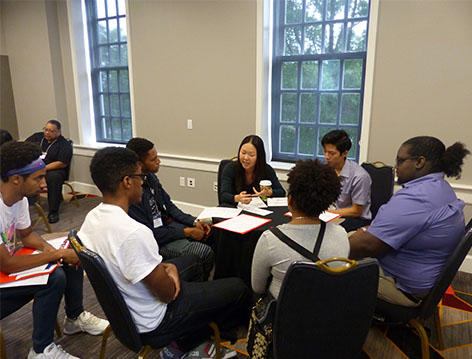 Attracting students to science, technology and mathematics (STEM) has emerged as one of the nation's leading educational priorities. Historically, physics has had one of the lowest levels of women and racial and ethnic minorities among all STEM fields. Research by the American Institute of Physics has shown that women and minorities are consistently underrepresented among those receiving physics bachelor's degrees, compared to their portions of college enrollments. And only about four percent of PhDs awarded in this country go to underrepresented minority students, i.e., African Americans, Hispanics and Native Americans.

On Friday, Oct. 7, the CU2MiP opened at NIST with a welcoming address by Nobel Laureate and UMD Distinguished University Professor Bill Phillips. Phillips gave an inspiring and engaging talk on having fun while pursuing a career in physics, but also spoke with sadness of Gebbie, the retired Director of NIST's Physical Measurement Lab who had greatly looked forward to meeting the students of CU2MiP. Dr. Gebbie died August 17 at the age of 84.

Sunday's agenda included a talk by Dr. Tabbetha Dobbins of Rowan University, a community building session and an address by department Chair Steve Rolston. Several UMD physicists participated in "Exploring Careers in Physics," which highlighted the many ways that the analytical skills, knowledge and technical expertise that accompany physics degrees can be put to use in academia, government and industry. UMD undergraduates Paula Rodriquez and Myles Poole offered closing remarks.

Participant enthusiasm seemed very high, according to Hammer. "We were extremely happy with the energy the students brought, and with the rapport that developed over the weekend," she said. "Our speakers and panelists were all so encouraging and helpful to this next generation of scientists." Hammer stated, "The extremely positive responses we received fromCU2MiP have already have us excitedly working on planning for next year."

A survey of the CU2MiP students returned highly-favorable reviews and comments:

What struck me most were the speakers. They were truly inspiring and motivating.

It was more insightful than I had expected. The guest speakers all shared information that was unknown to me and offered motivation to continue in my physics studies.

I am leaving with new friends, great connections and an overall newfound love and appreciation for physics and the sciences.

Please accept my condolences on the passing of Dr. Gebbie. She is still having a positive influence on science through persons like you who carry on her philosophies through these kids of activities.

I enjoyed meeting so many people who have experienced being a minority STEM student and were willing to share their unique insight into navigating the academic world and beyond.

Honestly I have never had more fun doing anything in my entire life.

Read about the 2021 conference here: https://umdphysics.umd.edu/about-us/news/department-news/1681-2021-cu2mip.html